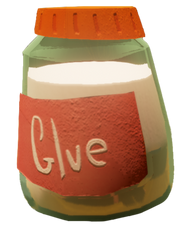 This is the glue jar we've had since Alpha 3.

Jars of Glue are items used by Mr. Peterson in Hello Neighbor. They were added in Alpha 3.

Jars of glue can be found around the Neighbor's house and are used by the neighbor to slow the player down.

A single jar belonged to the player , while the neighbor had a lot in Alpha 3. The Neighbor will also throw these at the player during a chase. When thrown, the glue spills out in a puddle. When it's stepped in, it will slow the player down and prevent them from being able to jump. The Neighbor can also be affected by the glue and he'll also be slowed some. In Alpha 3, he could throw glue to an extent distance.

In Alpha 4, the frequency of the Neighbor's glue-throwing was decreased significantly. In the final game, the neighbor threw glue at you as well as Tomatoes.