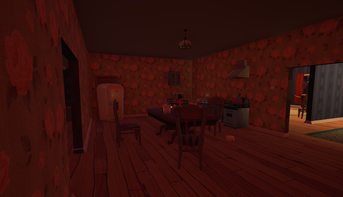 The kitchen in the Pre Alpha version of the game.

When the protagonist would walk into the neighbor's house, there's a hallway leading to the kitchen on the left. There was a dining table, chairs, refrigerator, a microwave on a dresser, boxes, and paintings on the wall. There was food and also the key to the basement on the table. There was a pair of double doors in the back of the kitchen that led to a door with a sliding lock on it which we never see in any other build. But this lock is seen in the Alpha 2 files.

This is a first take on the kitchen in the released Hello Neighbor builds. You just had to walk a little straight through in the front door to get in. It was a small but functional kitchen the neighbor would get apples and toast from to eat every so often. There was a door that was blocked most of the time by the refrigerator leading in the neighbor's Bedroom. The fridge would be moved after unlocking the basement providing normal access to the bedroom from the kitchen. The fridge also had apples and tomatoes inside. There was trash on the floor. There was 3 chairs, a dining room table, as well as various food items, and a pot of poinsettias flowers on the table. There was bread in the cabinets on the floor with a tea kettle and frying pan on the stove. Later two sets of missing cabinets in the debris pile on the front porch are put back in the kitchen on the wall after unlocking the Basement door.

The kitchen in the Alpha 1 version of the game.

The kitchen from Alpha 1 is a lot bigger than the one in the Pre Alpha version. There's now a window, way more cabinets on the wall and floor, more garbage, and two chairs. In this build of the game, this is where the neighbor seems to spend a chunk of his time at. Since nothing important is in the kitchen or in the dining room in this version, you can just try to avoid the two rooms as much as you can since the neighbor spends a chunk of his time here. This time, unlike every other version of the game, the Dining Room and kitchen are separate rooms. The cabinets are empty in this version, and only apples are in the refrigerator this time. Most of the food items are in the dining room on the table. There is once again 3 chairs, the table, poinsettias flowers on the table, various food items, and a crow painting on the wall.

The kitchen from Alpha 2 has a various amount of uses and importance. We can first see it in the tutorial world. There's only the stove vent, a chair, a few cabinets, and the sink. Most of the kitchen is missing in this area of the game, but a kitchen cabinet in the old art style can be found in the bedroom laying on the floor. You have to be in ghost mode to access the bedroom.

When you wake up in the world with the neighbor, you'll see the cutscene where the neighbor is drinking from the Milk Jug. After the cutscene is over and we start the game, we can go into the kitchen to find a wrench in the refrigerator freezer, a flashlight behind the Milk Cartons on the bottom shelf, and a lockpick in a kitchen drawer below where the Milk Jug usually is at.

There's also a dining table with a potted plant, 3 chairs, and various food items and trash. It also featured the clock on the wall, which was the first time the clock was added in-game. There was also paintings on the wall. In Alpha 2 and Alpha 4 and onwards, the kitchen always had a part in getting into the basement. (Mainly being where the keycard is at.) But it's usually tricky since the neighbor spends a lot of his time in the kitchen like he did in Alpha 1. He also spends a lot of time in the Bathroom and Living Room that right next to the kitchen, making it even more difficult to get into the kitchen. It's best to wait for him to go the other side of the house and sneak in, or to distract the neighbor and get him to the other side of the house.

In Alpha 3, the kitchen served no real purpose in the player's mission. It was to the left of the front door. There was a flashlight in the kitchen wall cabinet by the corner of the room. This would help the player see since the Alpha 3 build was really dark. Other than that, the kitchen featured the same old things. The refrigerator, the stove, cabinets, a toaster, dishes, and the dining room table, chairs, food items, trash, mugs. and paintings on the wall. The only thing new was Glue being under the counter in the corner of the room. A door in the back of the room led to the Glue and Generator Room.